How to Reach Us

The mind-set regarding sewage treatment throughout the world’s population prior to the late 19th and early 20th century was a somewhat familiar phrase, “the solution to pollution is dilution.” As fresh water supplies throughout the world became scarce and/or more contaminated with pathogenic (disease causing) organisms, i.e., cholera, typhoid, dysentery, etc., the industrialized world governments realized that they must initiate measures to clean up their nation’s water supplies. At the time, due to limited technology, only rudimentary measures were initiated. It wasn’t until the development of the principals of alternating current (electricity) by physicists Nikola Tesla in 1881 that the science and technology of sewage treatment was improved.

In 1972 amendments to the Federal Clean Water Act mandated that owners and operators of sewage treatment facilities must upgrade their facilities to include secondary biological treatment.  In 1974 the Borough placed its newly constructed secondary treatment plant in service. The process known as conventional activated sludge was equipped with secondary clarification, newly constructed chlorine contact tanks, and the addition of the secondary anaerobic digester. The facility’s current design flow is 1.15 MGD (Million Gallons Day). Peak flow =’s 2.88 MGD.

Regulatory compliance is our primary goal at the facility. The facility must, as specified in the NPDES permit, be inspected 365 days a year with no exceptions. PA DEP licensed operators conduct these inspections. Laboratory analysis allows the operators to monitor and adjust the facility’s operation to ensure that the facility is meeting the guidelines as specified on our DMR (Discharge Monitoring Report.)

Sewage treatment is quite aggressive on the equipment and, therefore, expensive. Continual maintenance and necessary and costly upgrades to the facility ensure environmental compliance.

Recent upgrades or modifications to the facility include the following: 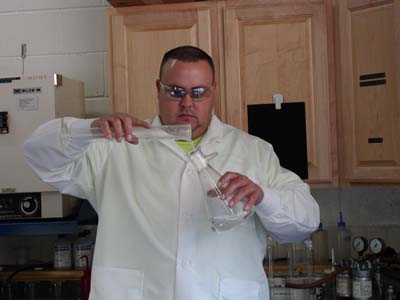